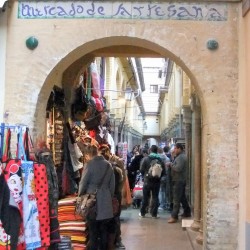 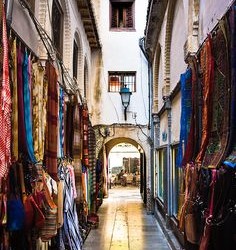 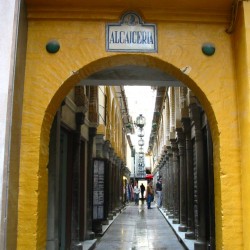 Many travelers seek out information about the deeper history behind some of the sites we visit. As a history enthusiast, I FREQUENTLY do just that, (thanks to the Internet research is at our fingertips.). Even the most humble or modernized areas can have a very interesting past. Take markets for example. Some are wonderful, while others may seem like overwhelming tourist traps. However, a little knowledge of their backgrounds can make even a very brief stroll through all the more enjoyable and rewarding.

I experienced this while wandering through a market that was once the grand bazaar of Granada, Spain, called La Alcaiceria. At first glance, it may appear as nothing more than a kitschy souvenir expose, but its history may cause you to do a double-take. I was delighted to discover that originally, the market was primarily known for selling silk and spices (along with other goods). Even in ancient times, spices traveled to and from many different markets to reach customers throughout Europe, Asia and Africa (and eventually the Americas). Not all venders were along the Silk Road. Granada was no exception. Understandably, this made me very interested in the market (fyi, spices are kind of my “thing”).

Located in the heart of the city, today’s Alcaiceria hosts many vendors selling primarily souvenirs. It does offer “exotic” merchandise also carried by the shops in the old Medieval Moorish quarter known as the Albayzin (or Albaicín), but it is also a good place to find post cards and perhaps a shirt to bring back as a gift or memorabilia. Very little remains to signify its former life as a silk and spice market. I found a few spice merchants in the narrow streets of the shopping center, and many vendors were not even aware of their existence. Furthermore, many of current spice shops have a larger selection of teas than they do spices. These factors did not really discourage me, however. When considering the demand that existed for silk and spices, and Granada’s history, it was not difficult to visualize the bustling crowd that once ventured through the displays of exotic and aromatic spices, and beautiful silks.

The name Alcaiceria, meaning the place of Caesar, was used for markets throughout the Moorish territories of Spain and the Middle East. The name was tribute to Emperor Justinian, who, in the sixth century, permitted Arabs to have the sole rights and control over the silk trade. The Alcaiceria in Granada was established in the 1400s, and in its heyday, was twice its current size and had ten iron gates for security. Its original architecture had a much heavier Moorish influence than what can be seen today. In the mid-1800s, a fire destroyed the market. From what I have read, the cause of the fire was from a shop that manufactured and sold the first cardboard matches in Granada (so remember kids, do not play with matches). The market was later rebuilt in a more Neo-Moorish style, and never really regained its former atmosphere.

In the areas surrounding the market, there were many inns to accommodate the merchants. Directly across from the Alcaiceria is the remains of the structure of Corral del Carbón, the last surviving caravanserai in Granada. This used to be where the merchants’ kept their camels and the caravans that stalked the vendors with product. It also was a place where traveling merchants could sleep and get food. Today, it is an empty structure, but it is certainly worth visiting and letting your imagination go wild! You can still enjoy the Moorish brickwork from the 1300s.

Despite the more contemporary Neo-Moorish architecture and its touristy nature, the Alcaiceria serves as a reminder of Granada’s unique history. When dining in Granada, you will notice that much of the cuisine is strongly reminiscent of northern African dishes. Along with the Alcaiceria, the Albayzins (the afore mentioned Medieval Moorish quarter) and the grand palace of Alhambra are all very clear testaments to the influences established and left by Moorish culture. As the last stronghold of the Spanish Moors during the Spanish Reconquista (the Christian Spanish reconquering of present-day Spain), Granada’s ties to its Moorish past are very strong.

Knowing the history of a site can alter your perception of a location and enhance your appreciation of what is around you. You may be amazed by the things you learn about the most seemingly mundane and unassuming places.